Nesting birds need our help—particularly those birds that nest in cavities, such as nest boxes, woodpecker holes, and other natural holes in trees. Competition among birds for limited nest sites is fierce, especially from aggressive non-native starlings and house sparrows. You can help native nesting birds by being an informed, conscientious landlord. We’ve compiled some useful tips, information, and resources to guide you as you help nesting birds in your backyard and beyond. We hope you will find this e-guide helpful.
At Songbird Prairie Inn and Spa, we host many species of birds in our boxes. Such as swallows, bluebirds, chickadees, and wrens. Come to enjoy nature. songbirdprairie.com

https://www.birdwatchersdigest.com/bwdsite/help-nesting-birds-right-way.php
Posted by Songbird Prairie Inn and Spa at 9:59 AM No comments: 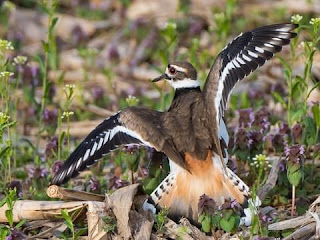 It’s a sure sign of spring now that the killdeer have returned. They are a large, double-banded plover that screams its name across farm fields and other grass and dirt covered habitats. If you see an orange-tailed, stripe-winged bird calling kill-deee, kill-deee, you can be assured that it’s this plover. Many killdeer were shot during the late 1800’s, along with a wide range of other shorebirds. These species are now protected from harm by federal and state laws. On its white breast, two black bands stand out. Killdeer are wet-sand brown above and clear white below, with white around the front of the face and eye. A farmer’s friend, the killdeer spends its foraging time searching for beetles, grasshoppers, caterpillars and other insects. Crayfish centipedes, spiders and other invertebrates are also eaten as well as some seeds. There will be more on the killdeer, since they are so interesting Efrain and Barbara Rivera, your hosts at Songbird Prairie, want to keep you informed of the beauty of nature here at the Prairie in Valparaiso, Indiana. We have blogged this near the Dunes National Park. Come and leave your footprints in the sand.
Unlike most other plovers, killdeer often forage or nest far from water. You may find them at ball fields, airport runways, pastures, farm fields as well as on mudflats. They are found through North America, but northern birds head south for the winter. During the summer, you will find them at the Dunes National Lakeshore and Songbird Prairie, our Valparaiso Inn and Spa near Valparaiso University. A simple scrape in the dirt or gravel will do for a killdeer pair, although they sometimes add embellishments, such as a lining of pebbles, grass or other small materials. Females lay three to five blotched eggs, which both parents incubate for just less than a month. Nesting in exposed habitats, killdeer rely on camouflage and deception to keep their eggs and chicks safe. If an intruder approaches the nest, an adult killdeer may feign injury, dragging a wing as if it is broken and exposing it’s bright tail; then lure the person or predator away from the nest. Adults watch over their hatchlings, little puffballs that can run and find food by themselves shortly after hatching. They fly before they reach 1 month. Come to Songbird Prairie B&B for a Chicago romantic getaway, just 45 minutes away. Hear the cry of the Killdeer, come away for that Romantic Getaway. Book Now Whirlpool/Fireplace suites songbirdprairie.com
Posted by Songbird Prairie Inn and Spa at 9:24 AM No comments: 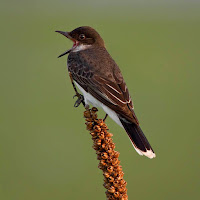 High in the treetops a medium-sized black and white bird flutters out to catch flying insects and aggressively attack other birds in flight, all the while emitting a sputtery series of sharp notes that sound like the zapping of an electric current. No need to look high in the tree tops here in Northwest Indiana at Songbird Prairie B&B, the Kingbird sits on the fence in front of the Inn for his breakfast. They are excellent fliers, able to catch flying insects and aggressively defend it’s breeding territory with its aerial mastery. Both male and female are black above and white below. The female’s chest is grayish. Male kingbirds have a small, red-orange patch of feathers on the crown, though this is rarely seen. A thin, white band on the tail margin clinches the identification. Spending the breeding season in open areas with scattered trees, eastern kingbirds prefer locations near water, probably for the bounty of insects. Fairly common in agricultural areas, pastures, city parks, and suburban neighborhoods with large trees and open understory during summer, most eastern kingbirds migrate to central and south America in winter. In migration, the kingbird travels in loose flocks, and it is not uncommon to see a dozen or more birds in one tree in spring or fall. The eastern kingbird or bee bird, is an insect eater, specializing in bees, wasps, moths, butterflies, on other large flying insects. That’s why they are here at Songbird Prairie we have a virtual buffet of them all! Sit and watch hunters, kingbirds find an exposed perch and wait for something edible to fly past. They then sally forth and grab the prey in their bill, returning to the perch to stun and eat the insect. Kingbirds also eat fruits at all seasons, including mulberries, cherries, and elderberries. These are most abundant here at Songbird Prairie B&B. Fruits make up the bulk of their winter diet in the tropics. The Kingbird’s nest is placed high in a tree and is a large, loosely woven cup of bark, twigs, and weed stems. Females do all of the nest building in incubation. A typical clutch is two to five eggs with a 15 day incubation period. Hatchlings spend about 16 days in the nest before fledging, after which they are attended to by both parents for several more weeks. They are very active in their territories in summer,  especially here at Songbird Prairie Bed and Breakfast so if you want to watch for their fluttery fly catching flights and listen for their loud zapping calls, give us a call come for the weekend, come for the night, or come just for breakfast. The old myth that eastern kingbirds prey primarily on honeybees resulted in many of these birds being shot. Studies have now shown that the kingbirds eat relatively few honeybees, mostly drones. songbirdprairie.com
Posted by Songbird Prairie Inn and Spa at 10:22 AM No comments: