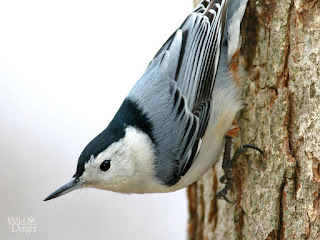 At Songbird Prairie, one of our guests most favorite birds is the white-breasted nuthatch. I think it is because they are universally known as the “upside down birds” because the forage by probing the bark of tree trunks with their heads downward. During their journeys down the trunk of a tree, they often stop, and then raise their head so that it is parallel to the ground. This is an absolutely unique posture among birds.  At nearly 6″ in length, the white-breasted nuthatch is the largest of its species. Males have gray backs with black caps, white under parts and a beady black eye on a white face. Females are similar but wear gray not black on their heads. White-breasted’s are thick necked and short tailed with a  stocky appearance. White breasted nuthatches calls- uttered frequently in all seasons are nasal and repetitive ank-ank.
White-breasted nuthatches prefer deciduous woods, but are also found in large parks and leafy backyards. Here in Northwest Indiana, our coniferous woods, also host the red-breasted nuthatch, which are much smaller in size.
The nuthatch eats both insects and seeds. We see them here at Songbird Prairie daily throughout the year. Insects make up nearly 100% of their diet and seeds are added treats. Autumn’s extra seeds and nuts are sometimes stashed or “hatched away” in tree bark crevices, to be retrieved later. This habit is what has given these birds their name. At Songbird Prairie Inn and Spa they come to the feeders and suet displaying a show for all our guests to see. Nuthatches maintain their pair bond and territory all year long. The nest is placed in a natural cavity, old woodpecker hole, or more rarely a nest box. Built by the female, it is a cup of grassed, bark strips, and twigs and is lined with hair. When the nest is finished, the nuthatches “sweep” the entrance with their bill, rubbing a crushed insect against the wood. The chemicals released may aid in repelling predators. The female incubates a clutch of eight eggs for two weeks. Both parents feed the young for at least two weeks until fledging.
In woodlands, listen for the nasal call anytime. Male and female always forage near each other and in winter with other species in a mixed flock. Come anytime of the year to see these characters who will serenade and entertain you.
The daffodils are in bloom along with the scilla, crocus, snowdropsand many more bulbs and wildflowers.
Posted by Songbird Prairie Inn and Spa at 8:48 PM

Email ThisBlogThis!Share to TwitterShare to FacebookShare to Pinterest
Labels: Inn and Spa near Chicago, Inn at Songbird Prairie, nature walks