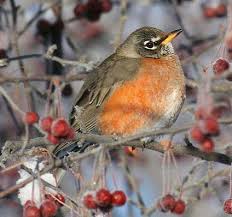 Feb 15, 2017 Saw a robin in a tree this morning eating some berries
but may not necessarily be a sign of spring.
ASHLAND (AP) - Much like Punxsutawney Phil and his fellow groundhogs, sightings of the American robin are considered by many to be a sign that spring either is here or soon will be.

As it turns out, some of the birds choose not to live up to the second half of their species name, Turdus migratorius. Instead, they opted to stick around northern Wisconsin and tough out the winter like the rest of us - with the exception of the so-called human "snow birds," of course.

"There's almost certainly some physiological threshold that they can't compete with, but for the most part it's food-driven with that kind of bird," said Ryan Brady, a research scientist at the Wisconsin Department of Natural Resources' Ashland office. "It's kind of the same with ducks: They only go as far as they have to for open water, because that's where they get their food."

Steve Lewis of the U.S. Fish & Wildlife Service's Division of Migratory Birds in Minneapolis said some robins in northern Wisconsin might have come south from Canada, "but they're not birds that are coming back early from their wintering areas."

Some may wonder how a bird weighing under 3 ounces can survive in a climate that can drop below zero degrees without warning.

For robins and other winter birds, it's simply a matter of sprouting a few more down feathers for extra insulation and finding a steady source of food. Frozen ground means no worms and frozen air inhibits crowds of insects, so robins and other birds like cedar waxwings will seek out fruit from crabapple trees and other berries still hanging on branches.

If they can keep their stomachs full, they see no reason to leave, said Dick Verch, a retired DNR employee who organizes the annual Christmas bird count for the Chequamegon Audubon Society.

"If you look at a lot of the fruiting trees - mountain ash and others - they still have fruit on them, and very often at this time of the year they've been stripped by birds," Verch said. "That's an indication there's a good quantity of food, so maybe as the birds went into the winter with a lot of food around them, it kept them here."

If you've never seen a robin in January, you're not alone. Jim Paruk, associate professor of biology at Northland College, said those who do notice them are typically "intense birders" who know where to look, such as ravines and gullies that offer birds shelter from the elements and from predators like hawks and cats.

"The average Joe, yeah, you don't see robins in the winter," Paruk said. "They are here, but they're not obvious, they're not perched out in the open. They're typically trying to survive a pretty stressful time."

Lewis said while the presence of robins in the winter is not "earth-shaking," nevertheless it is an "interesting phenomenon."

He and the other avian experts said the presence of a few robins or waxwings does not mean the impacts of climate change are being felt just yet. But Lewis said those impacts could soon be manifest in unknown ways.

"We're going to see a lot of interesting things in the next 20 years with bird distribution," he said.

Paruk said in the world of science, one year of evidence is tantamount to a fluke.

Added Brady: "In the long run, could it mean we have more robins that winter farther north? Potentially, but you can say that about anything at this point."

As far as the robins are concerned, though, it appears northern Wisconsin is not the only hot spot for the winter. Lewis said he's seen a number of reports in the Twin Cities about increasing numbers of robins that spend their winter in the big cities.

"I think people are starting to accept it as almost routine," he said.

Hearing a robin sing, however, is a bit more out of the ordinary.

Singing among birds is triggered by hormonal changes that are brought about by increasing hours of daylight. Since temperatures can fluctuate from year to year, evolution has taught the birds to depend more on sunlight as a sign of spring, Paruk said.

If you hear a robin singing in February, or even the call of the northern shrike, chances are they're just warming up their vocal chords, since the male birds sing to both attract a mate and to claim their territory, Paruk said.

"That saves energy for everybody," he said. "'This is my territory, that's yours;

www.songbirdprairie.com
Posted by Songbird Prairie Inn and Spa at 9:36 AM