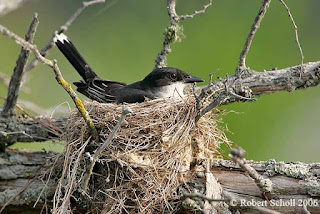 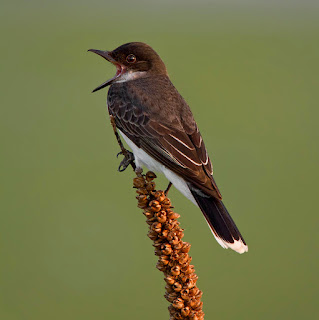 High in the treetops a medium-sized black and white bird flutters out to catch flying insects and aggressively attack other birds in flight, all the while emitting a sputtery series of sharp notes that sound like the zapping of an electric current. No need to look high in the tree tops here in Northwest Indiana at Songbird Prairie B&B, the Kingbird sits on the fence in front of the Inn for his breakfast. They are excellent fliers, able to catch flying insects and aggressively defend it’s breeding territory with its aerial mastery. Both male and female are black above and white below. The female’s chest is grayish. Male kingbirds have a small, red-orange patch of feathers on the crown, though this is rarely seen. A thin, white band on the tail margin clinches the identification. Spending the breeding season in open areas with scattered trees, eastern kingbirds prefer locations near water, probably for the bounty of insects. Fairly common in agricultural areas, pastures, city parks, and suburban neighborhoods with large trees and open understory during summer, most eastern kingbirds migrate to central and south America in winter. In migration, the kingbird travels in loose flocks, and it is not uncommon to see a dozen or more birds in one tree in spring or fall. The eastern kingbird or bee bird, is an insect eater, specializing in bees, wasps, moths, butterflies, on other large flying insects. That’s why they are here at Songbird Prairie we have a virtual buffet of them all! Sit and watch hunters, kingbirds find an exposed perch and wait for something edible to fly past. They then sally forth and grab the prey in their bill, returning to the perch to stun and eat the insect. Kingbirds also eat fruits at all seasons, including mulberries, cherries, and elderberries. These are most abundant here at Songbird Prairie B&B. Fruits make up the bulk of their winter diet in the tropics. The Kingbird’s nest is placed high in a tree and is a large, loosely woven cup of bark, twigs, and weed stems. Females do all of the nest building in incubation. A typical clutch is two to five eggs with a 15 day incubation period. Hatchlings spend about 16 days in the nest before fledging, after which they are attended to by both parents for several more weeks. They are very active in their territories in summer, especially here at Songbird Prairie Bed and Breakfast so if you want to watch for their fluttery fly catching flights and listen for their loud zapping calls, give us a call come for the weekend, come for the night, or come just for breakfast. The old myth that eastern kingbirds prey primarily on honeybees resulted in many of these birds being shot. Studies have now shown that the kingbirds eat relatively few honeybees, mostly drones.
songbirdprairie.com book now
Posted by Songbird Prairie Inn and Spa at 4:11 PM

Email ThisBlogThis!Share to TwitterShare to FacebookShare to Pinterest
Labels: Eastern kingbird, One of Midwest Living's 30 Favorite B and Bs with spa services and fireplaces, Places to stay near the Indiana Dunes Songbird Prairie Inn and Spa