Saw a robin in a tree this morning eating some berries but may not necessarily be a sign of spring. 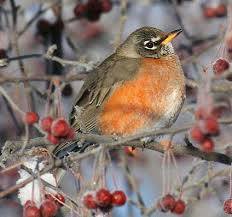 Much like Punxsutawney Phil and his fellow groundhogs, sightings of the American robin are considered by many to be a sign that spring either is here or soon will be.

As it turns out, some of the birds choose not to live up to the second half of their species name, Turdus migratorius. Instead, they opted to stick around northern Wisconsin and tough out the winter like the rest of us - with the exception of the so-called human "snow birds," of course. read full article on By CHAD DALLY, The Daily Press, Ashland
ASHLAND (AP) -  blog.songbirdprairie.com
Posted by Songbird Prairie Inn and Spa at 9:19 AM