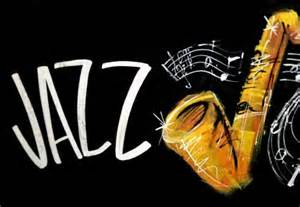 The Valparaiso University Jazz Festival is a week-long event full of performances from high school to professional level musicians featuring the University's faculty and student ensembles, and other guest artists and jazz bands. Then stay at Midwest Livings 25 Favorite B&Bs Songbird Prairie Inn and Spa. songbirdprairie.com
Posted by Songbird Prairie Inn and Spa at 3:53 PM No comments:

"Best in the Midwest" 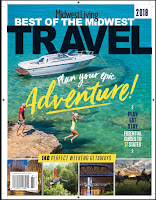 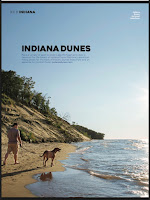 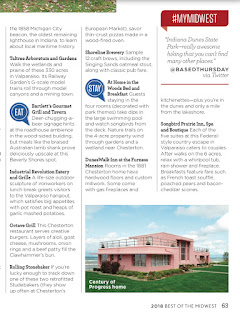 Posted by Songbird Prairie Inn and Spa at 5:26 PM No comments:

Any Day Is Special With Mom Is your mom a "Red Hatter" or a "Tool Belt Diva?"
Whether she's a "Red Hatter" or a "Tool Belt Diva", Plan a night reminiscing with Mom at Songbird Prairie Inn and Spa. Remember those breakfasts in bed where you served her burnt toast and cold tea? Let us serve you both our Gourmet Hot Breakfast in our sunroom where songbirds serenade and entertain.
Stay at Songbird Prairie with your mom in the Purple finch or Warbler suite and make her a bracelet of hand-blown glass beads and silver-plated metal beads which are topped off with a touch of rhinestone bling. Bracelet is included in package with beads of your choice up to $50.00 retail value. Package Starts @ $249.00. Children 12 and over welcome for this special only. Can't make an overnight? Come just for Breakfast or Afternoon tea (6 person minimum) Must Call for reservations #mothersday #afternoontea #indianadunes#lakemichiganbnb #valparaisoIN 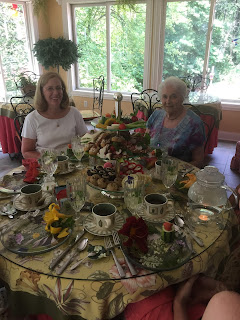 Posted by Songbird Prairie Inn and Spa at 10:08 AM No comments: 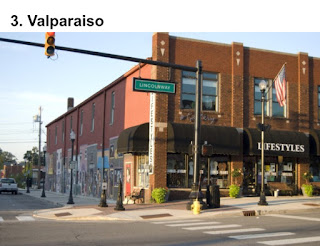 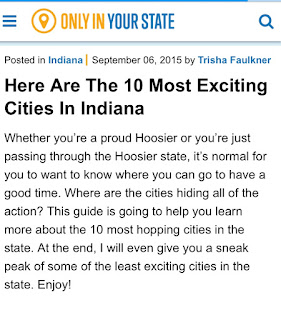 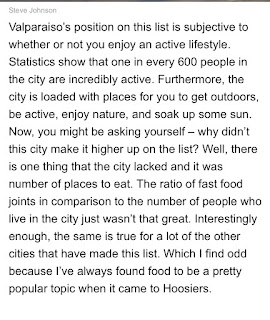 Posted by Songbird Prairie Inn and Spa at 9:11 AM No comments:

Our Barred Owl here at Songbird Prairie Inn and Spa in Valparaiso IN Our property also has the Barn Owl, the Great Horned Owl and the Screech Owl. Come to stay in one of our Luxury suites #barredowl #barnowl #greathornedowl #screechowl #visitindiana #coolnorth 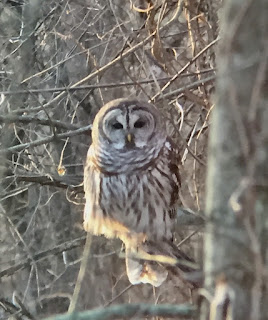 Posted by Songbird Prairie Inn and Spa at 10:38 AM No comments:

Just 4 Miles from Songbird Prairie Inn and Spa, the Albanese Candy Factory and Outlet Store in Merrillville, Indiana has enough magic and deliciousness packed inside to rival that of Willy Wonka. This candy factory has been a staple in Indiana for over 30 years. #albanese #songbirdprairie #indianadunes #visitindiana #coolnorth 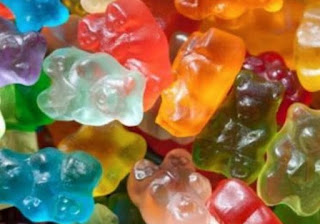 Posted by Songbird Prairie Inn and Spa at 7:41 AM No comments: 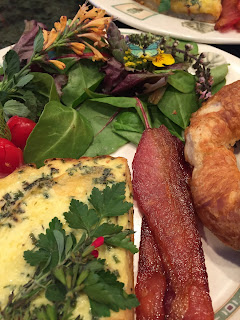 Posted by Songbird Prairie Inn and Spa at 3:56 PM No comments:

Email ThisBlogThis!Share to TwitterShare to FacebookShare to Pinterest
Labels: #visitindiana #lakemichiganbnb, Songbird Prairie Inn and Spa an Indiana Dunes Bed and Breakfast with Whirlpools and Fireplaces

This weekend we turn forward the clock.  We will offer 1 hour earlier check in this weekend at Songbird Prairie Inn and Spa if you wish. 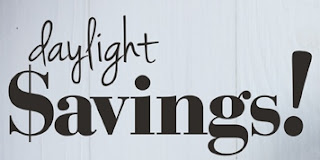 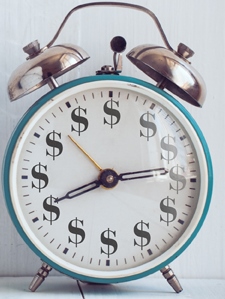 Sit in front of a warming fireplace, relax in a bubbling whirlpool, and enjoy the birds at breakfast as you are being served and pampered. songbirdprairie.com #daylightsavings #breakfastwiththebirds #afternoontea/IN #indianadunes #springahead

Posted by Songbird Prairie Inn and Spa at 5:09 PM No comments: 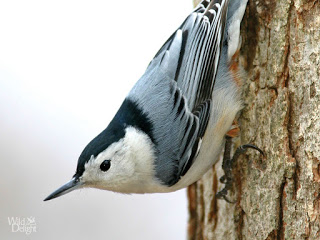 At Songbird Prairie, one of our guests most favorite birds is the white-breasted nuthatch. I think it is because they are universally known as the “upside down birds” because the forage by probing the bark of tree trunks with their heads downward. During their journeys down the trunk of a tree, they often stop, and then raise their head so that it is parallel to the ground. This is an absolutely unique posture among birds.  At nearly 6″ in length, the white-breasted nuthatch is the largest of its species. Males have gray backs with black caps, white under parts and a beady black eye on a white face. Females are similar but wear gray not black on their heads. White-breasted’s are thick necked and short tailed with a  stocky appearance. White breasted nuthatches calls- uttered frequently in all seasons are nasal and repetitive ank-ank.
White-breasted nuthatches prefer deciduous woods, but are also found in large parks and leafy backyards. Here in Northwest Indiana, our coniferous woods, also host the red-breasted nuthatch, which are much smaller in size.
The nuthatch eats both insects and seeds. We see them here at Songbird Prairie daily throughout the year. Insects make up nearly 100% of their diet and seeds are added treats. Autumn’s extra seeds and nuts are sometimes stashed or “hatched away” in tree bark crevices, to be retrieved later. This habit is what has given these birds their name. At Songbird Prairie Inn and Spa they come to the feeders and suet displaying a show for all our guests to see. Nuthatches maintain their pair bond and territory all year long. The nest is placed in a natural cavity, old woodpecker hole, or more rarely a nest box. Built by the female, it is a cup of grassed, bark strips, and twigs and is lined with hair. When the nest is finished, the nuthatches “sweep” the entrance with their bill, rubbing a crushed insect against the wood. The chemicals released may aid in repelling predators. The female incubates a clutch of eight eggs for two weeks. Both parents feed the young for at least two weeks until fledging.
In woodlands, listen for the nasal call anytime. Male and female always forage near each other and in winter with other species in a mixed flock. Come anytime of the year to see these characters who will serenade and entertain you.
The daffodils will soon be in bloom along with the scilla, crocus, snowdrop sand many more bulbs and wildflowers. Make your reservation today!
Posted by Songbird Prairie Inn and Spa at 11:54 AM No comments:

Think Spring the Snowdrops are blooming! 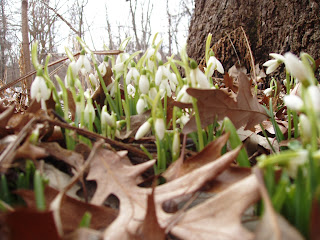 AIRBNB TRYING TO ATTAIN TO THE LEVELS OF B&BS AND HOTELS HA ;-(((
AIRBNB UNVEILS NEW LODGING CATEGORIES
Beginning just 10 years ago, Airbnb offered travelers 3 short term rental categories: shared space (couch/airbed), private room, or entire home. Ever since, Airbnb has been expanding their lodging portfolio, noting what types of properties received good reviews/ratings, and noting that potential guests were not finding a match to their preferences and leaving the site. Last week, 4 new categories were formally announced: Vacation Homes, Unique Spaces, Bed & Breakfasts, and Boutiques (hotels).
"Airbnb Plus" joins the "SuperHost" category in a quest to meet guests' desire for higher quality accommodations in response to their finding that 73% of Airbnb guests said they'd pay more for a vetted property. In fact, "Airbnb Plus" requires a personal visit by an Airbnb 'inspector' with a 100-point checklist in hand. Only then will the property be verified for quality and comfort (e.g. 'fresh matching towels', 'working appliances'). To start, 2000 homes in 13 cities will be (actually already have been) selected; US cities are Austin TX, Chicago, San Francisco, and Toronto. Presently, 204,000 rooms from B&Bs / Hotels are listed on Airbnb, of the 4.5 million properties on the site.
Despite acknowledging the need - and the public's preference - for vetting and a standard of quality, Airbnb did not reveal any requirements regarding compliance in licensing / registration (as per statues and local regulations), zoning, insurance, taxation, etc. We're disappointed.
The American Hotel & Lodging Association (AHLA) released the following statement from its Vice President of State and Local Government Affairs, Troy Flanagan, in regards to Airbnb's announcement about launching its new Airbnb Plus and Boutique programs.
"Whether it's called Plus or Boutique program, Airbnb's latest scheme is just further proof the company is trying to play in the hoteling space while evading industry regulations," Flanagan said. "If Airbnb wants to enter the hoteling business, then it needs to be regulated, taxed, and subject to the same safety compliances and oversight that law-abiding hotel companies adhere to each and every day."
"The question that cities and neighborhoods should be asking-will these 'Plus' or 'Boutique' listings include commercial operators exploiting Airbnb's platform to run illegal hoteling schemes that have fractured our communities, raised serious safety concerns and increased the price of rent while depleting affordable housing options," Flanagan added.
Posted by Songbird Prairie Inn and Spa at 11:40 AM No comments: 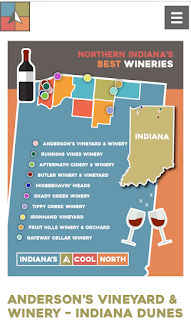 Wineries are where it’s at in Indiana’s Cool North. Fruit wines are a local specialty, and our climate is well-suited to produce exceptional varietals such as Traminette—the signature grape that’s native to Indiana—as well as classic blends you know and love. Add one winery to your weekend getaway, or set out on a tasting adventure around the region. Read on to discover some of the best wineries in Northern Indiana. posted by Indiana's Cool North Then Stay at Songbird Prairie Inn and Spa.
Posted by Songbird Prairie Inn and Spa at 11:04 AM No comments:

Email ThisBlogThis!Share to TwitterShare to FacebookShare to Pinterest
Labels: Indiana Dunes Bed and Breakfast, NWI wineries. wineries by the #IndianaDunes, One of Midwest Living's 25 Favorite B and B's with spa services and fireplaces
Newer Posts Older Posts Home
Subscribe to: Posts (Atom)