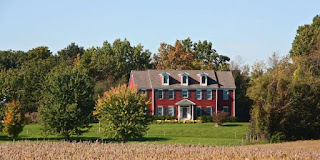 Posted by Songbird Prairie Inn and Spa at 6:15 PM No comments:

Drink your TEA sings the Towhee throughout the brushy woodlands here in Valparaiso, Indiana at Songbird Prairie Bed and Breakfast Inn and Spa. Book your afternoon tea to hear the Towhee's invitation to tea and time with friends. #afternoontea #hightea #tearoom  songbirdprairie.com 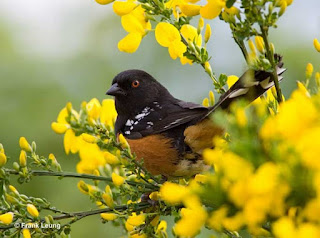 Formerly called the Rufous Sided Towhee this 8 1/2 inch long sparrow is boldly patterned and spends nearly all it’s time on the ground scratching among the leaf litter, looking for food. The name Towhee comes from the bird’s call, which has also been translated as chewink. Many people know this bird as the chewink instead of the Towhee. This is one of the favorites here at Songbird Prairie. Clean, flashy colors have given the towhee the nickname “Hollywood robin” In flight, the bird’s white wing and tail spots are just beautiful. Female eastern Towhees replace the male’s black plumage areas with chocolate brown. Towhees preference for thick cover and brushy habitat make them harder to see than other common species. But not here at Songbird Prairie, you will see them come right up to the feeders, a rare occurrence indeed!


The loud scratching of a foraging Towhee sounds like a large animal walking through dry leaves; this is often your first clue to a Towhee’s presence. Towhees eat just about anything found on the woodland floor, including insects, seeds, fruits, and even snails, spiders, and millipedes. They prefer to scratch the ground under feeding stations for mixed seeds, cracked corn and sunflower seeds. They nest near the ground in a well-concealed spot. The female weaves a cup-shaped nest out of rootlets, bark strips and grass. She also handles all the incubation duty, which typically lasts about 12 days. Normal clutch size is three to four eggs; young towhees fledge in about 10 days. Both Towhee parents feed the youngsters, which allows the female to start a second and sometimes third brood. This is one of my very favorite summer birds. Some and see the Towhees at our Inn. www.songbirdprairie.com #midwestlivingbestbnbs #indianadunes #breakfastwiththebirds, #Towhee, #mothersday #afternoontea #indianadunes#lakemichiganbnb #valparaisoIN,
Posted by Songbird Prairie Inn and Spa at 3:46 PM No comments: