February's Bird of the Month The Cedar Waxwing 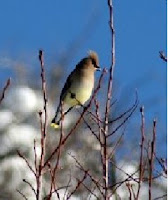 The Cedar Waxwing is one of the most frugivorous birds in North America. Many aspects of its life, from its nomadic habits to its late breeding season, may be traced to its dependence upon fruit.

Conservation Status
Populations increasing throughout range. Other Names
Cool Facts:
The name "waxwing" comes from the waxy red appendages found in variable numbers on the tips of the secondaries of some birds. The exact function of these tips is not known, but they may serve a signaling function in mate selection.
Cedar Waxwings with orange instead of yellow tail tips began appearing in the northeastern United States and southeastern Canada beginning in the 1960s. The orange color is the result of a red pigment picked up from the berries of an introduced species of honeysuckle. If a waxwing eats the berries while it is growing a tail feather, the tip of the feather will be orange.
The Cedar Waxwing is one of the few temperate dwelling birds that specializes in eating fruit. It can survive on fruit alone for several months. Unlike many birds that regurgitate seeds from fruit they eat, the Cedar Waxwing defecates fruit seeds.
The Cedar Waxwing is vulnerable to alcohol intoxication and death after eating fermented fruit.
www.songbirdprairie.com
Posted by Songbird Prairie Inn and Spa at 12:17 PM