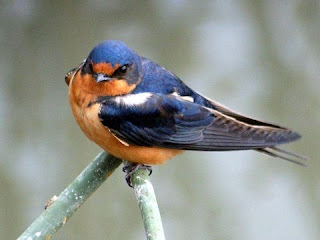 Mowing the lawn here at Songbird Prairie Inn and Spa can sometimes cause me alarm. As I stir up the bugs hiding out in the tall grass, the barn swallows descend with grace, darting after insects and chattering incessantly. One early naturalist estimated that a barn swallow that lived 10 years would fly more than two million miles, enough to travel 87 times around the earth. This species seems to define what it means to be at home in the air, and it has been compared to an albatross in its ability to stay effortlessly aloft. One of the most familiar and beloved birds in rural America, the barn swallow is welcomed everywhere as a sign of spring. Here at Songbird Prairie Inn and Spa, you won’t miss them in constant flight as you approach the meadow. Glossy blue-black above and orange below, the barn swallow is the only American swallow that has a true “swallow trail”, with an elongated outer pair of tail feathers. Males and females are similar, but females are not quite as glossy or highly colored, and the fork in their tails is not quite as pronounced. Like all swallows, they have short legs and rather weak feet used for perching, and not walking. A bird of rural areas and farmlands, Like the terrain at Songbird Prairie Bed and Breakfast here in Northwest Indiana, the barn swallow may be found over any open area, such as pastured, fields, and golf courses as well as lakes, ponds, and rivers. Basically anywhere they can fly unencumbered and where there is abundant insects. It has adapted well to humans and is not shy of people, nesting close to settled areas as long as it has open space for feeding. Barn swallows travel in great flocks during migrations, often in company with other swallow species. They arrive in most of their U.S. range in April and leave in early to midfall. Foraging almost entirely on the wing the barn swallow takes a variety of insect prey, from flies and locusts to moths, grasshoppers, bees, and wasps. YES! So they won’t sting me. Nothing says “country” more than a pair of barn swallows zipping in and out of the open doors of a working barn. Sometimes two or three pairs will share a favored site. The nest itself is a cup of mud and grass, lined with feathers and placed on a rafter or glued under an eave. Besides barns, barn swallows may use other open buildings, covered porches, or the undersides of bridges or docks. During second nestings, immatures from the first brood help feed and care for their younger siblings. During breeding season, you may bring barn swallows into close range by throwing feathers into the air near a flock of soaring birds; the graceful fliers will swoop in to snatch them up for nest linings. Barn swallows also enjoy eating bits of baked eggshells (crumble them first) during breeding season. 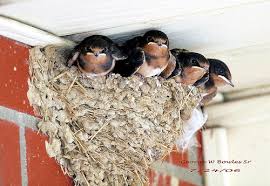 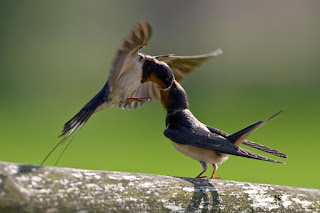 Posted by Songbird Prairie Inn and Spa at 11:06 AM